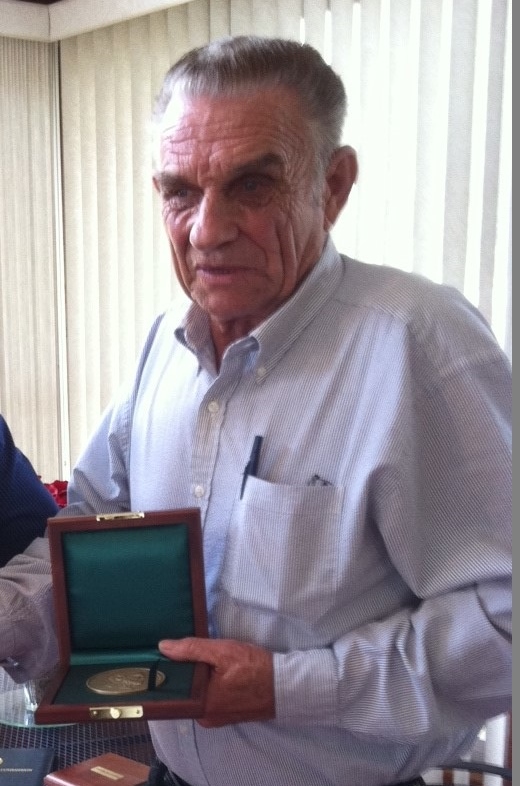 If the Star-Banner were a tabloid, we would have already conferred a proper nickname on Stan Romberg, the 68-year-old hero who thwarted an invasion of gun-wielding robbers at a local Texaco Thursday night (March 19, 2009) and almost paid for it with his life.

In massive black letters as tall as a fishing tale and as thick as Rush Limbaugh, we would have dubbed him Ice-Berg for his cool actions under fire. Literally, under fire. Or better yet, he would be ROMBO. Of course, if we were a tabloid, we would come back several days later and try to destroy the man by dragging out some embarrassing skeleton from his closet.

If that were possible. The truth is, Stan Romberg deserves all the platitudes you can throw his way. He is a true blue hero, a man prepared to trade his life for the life of a young woman who was little more than a casual acquaintance.

The incident, which was captured on the Texaco station’s security cameras, occurred about 10:30 at night when two men in dark clothing burst through the front door. One of the men headed straight for the counter, vaulted it, and stuck the barrel of a pistol against the head of clerk Upasana Pathak. Before he had a chance to rob or, perhaps, shoot her, Romberg lunged at him from behind and threw himself on the man. His momentum carried him past the gunman and he tumbled to the floor, but the message was delivered: You’re not getting her without a fight.

The startled thief began a hasty retreat, scurrying out from behind the counter and down the aisle toward the door, with Romberg in pursuit. As the security camera rolled, the gunman realized he—the predator—had become the prey. He whirled and fired a shot, striking Romberg in the left arm. But Romberg kept coming.

Both robbers sprinted for the door, throwing down a display case behind them to block Romberg, whose pursuit was not slowed by his wound. And that was it. Thirteen seconds after they burst through the door, the men were gone. And the 21-year-old Pathak got to go home alive.

The next afternoon, his arm bandaged, Stan Romberg downplayed his achievement, calling it instinct. “I just knew in my own mind that he wasn’t going to get that girl without getting me,” he said. “I think it shocked him maybe as much as it did us because he wasn’t planning on somebody going after him.”

No, he wasn’t, Stan. Some may call Stan Romberg foolhardy for jumping an armed man. Some may say he should have let events run their course. Perhaps Upasana would have escaped injury anyway and the only real damage would have been to Texaco’s night deposits, which would have been light a couple of hundred dollars.

Those people miss the bigger point: Stan Romberg confronted evil and beat it back. He refused to let two thugs determine another’s fate. He took the fight to them and, in all likelihood, prevented the loss of a precious, promising life.

And what if the gunman’s aim had been better? What if the bullet pierced Romberg’s heart instead of his arm? Would it still have been worth it? Romberg seemed prepared to make that sacrifice. Because, as the Bible says, there is no greater love than that a man should lay down his life for another.

Photo by Alan Youngblood of the Ocala Star-Banner and used with permission.