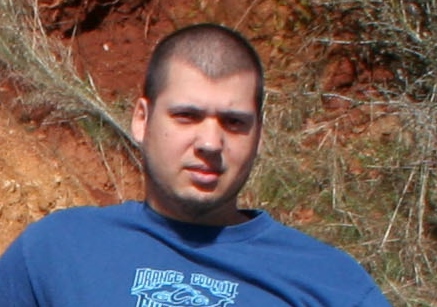 Right after Taj Matney saved the life of David N. Guldner on October 13, 2003, he did not reflect on any lasting effects the experience might have on him. In fact, Matney had not given much thought to the matter immediately before acting. The Hero Fund’s founder, Andrew Carnegie, would not have been surprised: “Heroic action is impulsive,” he concluded during the Fund’s genesis.

The truth is, Matney’s and Guldner’s lives would touch and stay connected, although neither knew it that day.

Matney, then 33 and a union electrician, was driving home near Sonora, Calif., when he saw vehicles parked and people standing by the side of the road, at the top of a ravine. Matney also stopped, at what he found to be an accident scene, something that was not his habit. Eleven years earlier, Matney’s older sister was injured in an automobile accident and died later of those injuries. In the crucial minutes that followed, no one tended to her. Matney and his family concluded that if someone had, perhaps she would have survived.

At the bottom of the ravine Matney saw a pickup truck, its passenger side positioned against the slope. Flames rose from the ground beneath the engine. Matney made his way down and saw that Guldner remained inside the truck—the 41-year-old business operator had attempted to climb out but could not. In the meantime, flames had entered the cab, and in a voice devoid of emotion, Guldner told Matney: “I’m on fire.”

Because of the position of the truck, Matney had to climb atop it to have leverage to pull Guldner out. Even then, balancing his weight to keep one foot on the roof and the other against the outside handle of the driver’s door, Matney tried to pull Guldner upward but could not. Guldner was apparently caught in the wreckage.

Matney looked at the small crowd at the top of the ravine. He yelled for help, but no one responded. Flames and black smoke grew more menacing, and Matney struggled harder to free Guldner. Finally, Guldner came free. Matney pulled him from the cab, and Gulder landed on the ground. Matney climbed down beside him. Two men joined him, and all three dragged Guldner to the top of the ravine. Guldner, with severe burns and other injuries, was hospitalized and began a slow recovery. Matney drove himself to a local hospital emergency room to be examined, then returned home.

For Matney, it was the end to a good deed done well. He knew his adrenaline would dissipate, reporters and others would cease asking about the rescue, and his life would return to its routine, one in which he and Guldner would remain strangers. He was wrong, but the friendship would not develop immediately, as Guldner had a long period of healing ahead of him.

Matney, meanwhile, began to lose interest in riding his two motorcycles—for years he had liked the thrill of “slamming” off road and had “some pretty close calls.” After his encounter with Guldner’s burning truck, he realized that serious injury was not just an abstract. He did maintain his home-based business of converting trucks for off-road use.

Guldner and another man owned and operated a machine shop that offered customizing of motorcycles, among other things, and as his recovery permitted, Guldner resumed working. He and Matney reconnected, Guldner learning of Matney’s experience with motorcycles and truck conversion. Matney did a job for Guldner, and more followed. Rescuer and victim became, in a sense, coworkers. Their relationship grew beyond the shop into a social one that now includes their families.

(Matney was awarded the Carnegie Medal in December 2004. Photos of her heroic son by Nellie Wooldridge.)