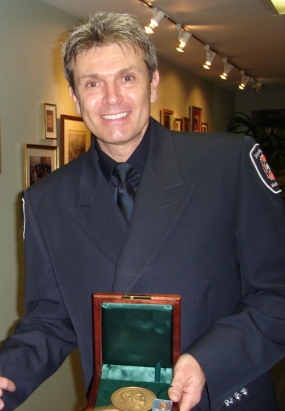 For two Montreal teenagers, Richard Lemieux was at the right place and the right time on a spring night in 2005. The teenagers—a 16-year-old girl and her boyfriend, also 16—and the girl’s mother were in a fourth-floor apartment after fire erupted there before dawn on April 30. The girl’s mother jumped from a window but was killed when she struck the ground. The girl and her boyfriend stood at a window and screamed desperately for help.

Living less than 100 feet from their building was Lemieux, a 46-year-old captain with the Montreal Fire Department. Awakened by the teenagers’ screams, he went outside and saw flames at the top of the apartment building. With more than 25 years’ experience as a firefighter, Lemieux reacted automatically. He ran to the scene.

Entering the building and proceeding to the figuring apartment, Lemieux saw immediately that flames blocked any entrance or exit. He went to an adjoining apartment and approached a window that was about four feet from the window at which the teens were standing. Sitting on the windowsill, his back to the outside and his feet off the floor, Lemieux braced his left arm against the inside of the window for balance.

He then told the teenagers to step from their window to his. The boy, who outweighed Lemieux by about 70 pounds, climbed from his window and, facing the building, positioned one foot on the sill of Lemieux’s window. As the boy moved toward him, Lemieux leaned sideways, grasped his pajamas with both hands, and pulled him, safe and sound, into the neighboring apartment.

By then, Lemieux could see flames behind the girl, who seemed too afraid to follow her friend. Fortunately, fire trucks were arriving. A ladder from one of the trucks was positioned against the building, and a firefighter climbed to the window to help the girl to the ground.

Lemieux’s courageous action was recognized in June 2006 with the award of the Carnegie Medal and a financial grant of $4,000. In November he and his companion spent three days in Pittsburgh, where he received the medal in an informal presentation in the Commission’s offices. During their stay, they toured the city, taking in a few landmarks associated with Andrew Carnegie, and they visited a station of the Pittsburgh Bureau of Fire, where Lemieux had an opportunity to spend a few minutes talking shop with a few of his firefighter “brothers.” To date, 65 persons from Quebec have been cited by the Hero Fund.