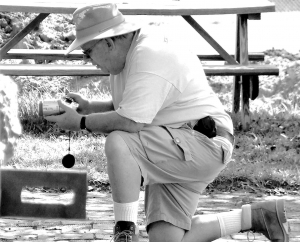 The author, at an 1812-era fort site in Macon, Ga., photographing historical etchings.

The Carnegie Medal resides in a prominent location in our home, but I rarely talk about it unless someone asks, or my wife, kids, or grandkids point it out to a visitor. Rarely do I bring up the medal or the story behind it. It is the gracious icing of an event that tragically happened to someone else, and I just happened to be at the right place at the right time with the ability to help someone in need.

My family were members of a boating club and normally each summer made three or four boat trips of 40 to 150 miles on holiday weekends. Over Labor Day weekend in 1962 about 20 boats made the downriver trip to Guntersville, Ala., a long peninsula that has various bridges and causeways leading to the community and waterside motels.

Just before noon on Sunday, Sept. 2, we were still in our motel taking it easy. One of the club members knocked on our door and told me to grab my camera and take photos of an accident about a quarter-mile out on a causeway. Two cars had collided and entered Big Spring Creek, an arm of Guntersville Lake. I ran to the scene, where I heard someone say that two young girls were trapped inside one of the cars, which was submerged in water 11 feet deep about 30 feet from the bank.

I removed my wallet, watch, camera, and glasses, jumped into the water, and swam to the location of that car. On the first few dives I tried to find an opening into the car, which was lying on its side, driver’s side down. After finding the front passenger window open, I entered the car; each dive reported to me later as being one to two minutes each. On the seventh dive I found the first girl entangled in the pedals and pulled her out. She was revived on shore.

In repeated dives I found the second girl crumpled up on the rear parcel shelf. During the last dive, the front seat broke loose and jammed against the ceiling of the car. How I got out I still do not yet know. My father was timing the dives and believed I was a goner because of the length of the last dive. Although I removed the second girl from the car, she was too far-gone to be resuscitated.

Then I became an idiot. A wrecker appeared on the scene, and I took its cable, dived down, and tied it to the car’s front bumper. That was the last that I remembered for about 30 minutes. Someone else pulled me out of the water, and it was better than 20 minutes before I could sit up without everything spinning on me.

I should have drowned that time and two others during my life and should be horrified of the water, but that is not the case. Would I do the rescue again if the circumstances presented themselves? Probably yes, even at the age of 68, but I could not swear to that statement. Only the good Lord knows.

In 1968 Harris crossed paths with another Carnegie Medal awardee, Evelyn S. [Bryan] Johnson of Morristown, Tenn. Johnson failed Harris on his first flight test for a pilot’s license when he got into a “death spiral.” A few months later she passed him “with flying colors. I learned a lot from that incident,” he said. Harris went on to become an aerial photographer for the Tennessee Valley Authority. Harris is also the author of one book, Civil War Relics of the Western Campaigns, 1861-1865, and the coauthor of a humorous book about hunting for Civil War relics with a metal detector, Never Mace a Skunk II. He and his wife Teresa are on the staff of a magazine about relic hunting, The American Digger.