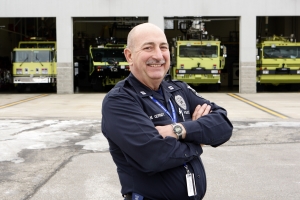 Carnegie Medal awardee Michael J. Gerndt, Sr., of Elkhart, Ind., was the 2010 winner of a lifetime achievement and education award given by South Bend, Ind., Regional Airport’s department of public safety. As captain and training coordinator for the department, Gerndt trains police officers, firefighters, and emergency technicians—”every kid’s dream job,” he says. In 1993, he was cited by the Hero Fund for his actions in behalf of two women who were drowning in Lake Michigan at New Buffalo, Mich. Then 41, Gerndt swam against a strong current to rescue one of the women, and he searched for the other until near exhaustion set in. Before Gerndt received his Carnegie Medal, he suffered a stroke, and with the award’s accompanying grant he bought a computer to help him regain his reading skills. The Hero Fund “supplied me with the catalyst that accelerated my recovery,” he wrote at the time.

Photo by Marcus Marter that was supplied through the courtesy of the South Bend Tribune and is used with permission.