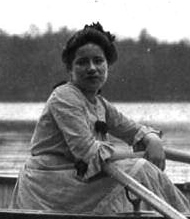 Carnegie Medal awardee Lucy E. Ernst of Philadelphia, Pa., risked her life to save that of a cousin in 1905, and more than a century later, three generations of descendants can claim similarly remarkable feats. “Although small in stature, Lucy had a big heart,” says grandson Ed Weihenmayer, 69, of Amelia Island, Fla. “Her courage and perseverance have been passed down to her blood line, maybe by means of her genes but certainly through her character.”

On July 8 of that year, Ernst, 20, and her cousin Harry E. Schoenhut, 16, were gathering birch bark in a grove about a quarter-mile from the clubhouse of the Porter’s Lake Hunting and Fishing Club in northeastern Pennsylvania when Harry was bit by a rattlesnake. The Hero Fund’s contemporary account is descriptive of what happened next:

“Miss Ernst, noticing that something was wrong with her companion, rushed to his side, but he hesitated to tell her what was wrong and rolled over on the ground, holding his left hand over the bite, about four inches from the shoulder. When he finally showed her the wound, she immediately put her lips to it and drew out some of the poisonous blood. The arm was turning black and swelling rapidly, and to accelerate the flow of blood, Miss Ernst secured Schoenhut’s pocketknife and cut the wound. Not being satisfied with the success of her operation, she again placed her lips over the cut, doing this repeatedly while making their way to, and at, the clubhouse, which they reached after stopping once, Schoenhut became too faint to walk.

“The clubhouse was deserted. It was seven miles to the nearest dwelling, 14 to the nearest railroad station, and 21 miles from Stroudsburg, where the nearest physician resides. Physicians did not arrived until four hours later, when they found Schoenhut to be out of danger. Miss Ernst had been relieved of her charge previous to their arrival, by other members of the club who had arrived. She fainted and was ill from the shock and excitement about a week. She had a fever blister on her upper lip, which prominent physicians say made it extremely hazardous for her to place her lip in contact with the poison. There was also danger of infection through the mouth…”

Ernst married and became the mother of an athletic son, Barney Berlinger, who in 1931 was given the Sullivan Award by the Amateur Athletic Union (AAU)—the “Oscar” of sports awards given to the greatest amateur athlete in the country. Berlinger had won the decathlon championship at the Penn Relays in 1929, 1930, and 1931. At age 19, he represented the U.S in the Olympics in 1928 in Amsterdam, finishing fourth. He missed the 1932 Olympics because of a severe hamstring injury but later that year went one-on-one against the 1932 Olympic decathlon champion, Jim Bausch, in Madison Square Garden, beating him convincingly. In 1933, when all 10 events were still completed in one day, he set the decathlon’s point-score record, losing 26 pounds in the process. His Sullivan Award was the second given, following the inaugural award in 1930 that went to golfer Bobby Jones.

Berlinger’s son, Barney Jr., now 71, of Carversville, Pa., and Weihenmayer, his cousin—Ernst’s grandsons—captained their respective University of Pennsylvania and Princeton University football teams in 1959 and 1961. Barney competed twice in the national decathlon championships, finishing 9th and 10th. Weihenmayer was an attack pilot for the Marine Corps in Vietnam, and two of Ernst’s great-grandsons, Barney Berlinger III and Bill Hyndman V, flew helicopters for the Army in Bosnia.

Weihenmayer’s son, Erik, 41—another great-grandson—is the most famous blind athlete in the world. Legally blind since birth and completely blind since age 13, Erik, of Golden. Colo., has skied the Alps, biked the length of Vietnam, and completed the Primal Quest, the world’s most brutal adventure race. He is better known as the only blind person to climb Mt. Everest. Other climbing feats include the Seven Summits, the highest peaks on every continent; the 3,100-foot overhanging rock face of El Capitan in Yosemite National Park, Calif.; and the 3000-foot ice waterfall, Polar Circus, in the Canadian Rockies.

“Lucy didn’t run track or play football, squash or golf,” Weihenmayer said, “but she set in motion a family that embodies the same qualities that she displayed in saving cousin Harry’s life. She would be proud of her legacy.” Ernst died at age 75 in 1961.