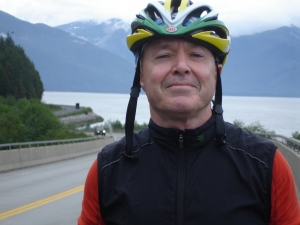 Hearing from a past awardee is like hearing from an old friend. And all’s the better when the news is good, as was reported by Brendan T. Elliott, of Victoria, B.C.

Elliott, who was awarded the Carnegie Medal in 1995 for helping to save a man from a burning apartment, resumed contact with the Hero Fund in November of 2008. “The Carnegie Hero Fund supplied major funding for my education, for which I am eternally grateful. I am presently employed by the British Columbia Ministry of Children and Families as an adoption social worker and have been in this position for over nine years. Without the Commission, I would not be where I am today.”

Elliott graduated from the University of Victoria in 1998 and was immediately hired by the provincial government as a child protection worker. A short time later, an advertising campaign was started by the province to raise awareness of children in care and, more specifically, to move those children into permanent homes. The children ranged from infancy to 19 years in age and came from chaotic and abusive backgrounds. The campaign used a variety of media, including television, and the response was overwhelming.

“Prior to attending college,” Elliott said, “I was involved in the theatre as an actor, but it would be fair to say that more often than not I was ‘between jobs.’ However, my training in this craft was to prove invaluable in dealing with the response to the adoption campaign. For one thing, I was accustomed to speaking in front of large crowds.

“In the first year of the campaign, the province placed more than 300 children with permanent loving families, and that figure has been maintained for seven years with very little fluctuation. To date, I am one of the most successful recruiters in the province, having recruited more than 250 families that have gone on to provide successful adoption homes.

“I have a fantastic job. I once met a child, about 8, who, upon meeting me for the first time said, ‘You may not know this, but I can burp and talk like Donald Duck.’ He then not only proceeded to talk like Donald Duck, but he did it in the language of burp! How could I not love a job that has that type of stimulating interaction?”