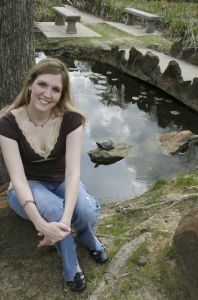 Obtaining a college degree has always been a dream of Miranda A. Elkins, and now her dream is coming true. The Carnegie Medal awardee, cited in 2005 for the rescue of a man from drowning in the Gulf of Mexico, is graduating this year from Texas Women’s University in Denton, Texas.

Her degree will be a bachelor of arts in English Literature, and Elkins, 25, has plans to continue her education. She would like to stay at the university and complete her master’s degree and perhaps one day get a doctorate so that she could teach at the university level. As an awardee of the medal, Elkins received financial assistance from the Hero Fund to help with tuition costs, aid for which she is extremely grateful. “The biggest change in my life has been the opportunity to go to college,” she says.

In addition to her studies, Elkins works at a day-care center, where she helps the after-school children with their homework, and at a local community college as a writing tutor. But her biggest news recently is that she is a newlywed. On Jan. 6, she married Tim Livingston, who is working through ministry training and is close to being ordained. The couple met a year earlier, introduced by friends, and now live on the Elkins family farm in Gainesville, Tex., north of Fort Worth.

Elkins grew up in west Texas before moving with her family to Gainesville. She and an older sister, the new mother of twins, are of the first generation of their family to go to college, a choice encouraged by their mother. “It was either go to college,” Elkins said, “or go to college.” She graduated from high school in 2000 and began to take college courses as she could afford them, working her way through.

On Aug. 20, 2004, a few years into her coursework, Elkins and a friend were vacationing on South Padre Island, Texas. Elkins had never seen the ocean before, and experiencing it was a thrill for her. As her friend recognized an unusually strong current, the two stayed in waist-deep water. The current did claim an 18-year-old male swimmer nearby, taking him away from shore. “Part of me did not believe he was in trouble,” Elkins said, “and the other part screamed for his right to live. It was the latter that I listened to.”

Meanwhile, another vacationer, Robert Diaz, 46, of Charlotte, N.C., had immediately entered the water for the distressed swimmer and made his way out to him. Elkins, a summer-camp lifeguard while in high school, followed. She calmed the swimmer and had him hold to her as she returned to shore, their progress hampered by rough water and the current. Diaz was not as fortunate. He drowned in his rescue attempt.

“I felt responsible for Robert’s death for the longest time.” Elkins said. “I thought that if I had gotten there more quickly or done something differently… But with time, I realized I couldn’t have prevented it.” Elkins said she is uncomfortable with the term hero. “I’m not ashamed of being called a hero, but the words that I associate with the term—I don’t see them in myself.”