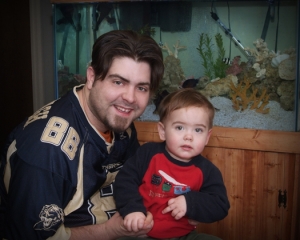 When Damion DeRobbio discovered that a 6-year-old neighbor girl was trapped inside her family’s burning home, in Pulaski, Pa., he did not hesitate to act. He is thankful for that. “If I didn’t do anything,” he now says, “I would probably have been haunted every day. It gave me peace of mind because I know I did everything I could.”

DeRobbio and his wife Sophia were alerted to the fire in the wee hours of that April 2004 day by the girl’s mother, who was pounding on their windows and screaming that her daughter was trapped in her bedroom. DeRobbio, then 25, responded to the burning house next door, where he broke out a window in the girl’s room with a plastic chair. However, neither he nor a police officer who arrived about then could access the window.

The men went to another window in the girl’s room, and the officer broke it. Using the chair, DeRobbio climbed into the bedroom, which was filled ceiling-to-floor with blinding smoke. Heat was intense, and DeRobbio saw an orange glow from the flames in the adjoining living room. “I felt around until I came upon the girl’s ankle,” DeRobbio said. “When I could get my arms around her I cradled her and crawled back out the window.”

For risking his life to save that of another, DeRobbio was awarded the Carnegie Medal in 2005. The award included a financial grant, which he used to buy a car and supplement his savings.

The heroic act also brought him an intangible benefit—a positive feeling about his self-worth. “It helps a person’s confidence having this split-second reaction,” he said. “I know I did everything I could, and it made me wonder what else I am capable of.”

After he was awarded the Carnegie Medal, he expressed interest in scholarship aid, which the Hero Fund offers to awardees and, in some cases, to their dependents. He hasn’t enrolled yet but said options for study include property management, commercial driving, or getting a captain’s license. A salesman, DeRobbio and his wife now live in Struthers, Ohio, with their 20-month-old son Donovan (pictured above). The couple hopes to move eventually to Florida, where DeRobbio, an avid fisherman, thinks he could fish for a living. He now frequents Lake Erie in the fall and winter.