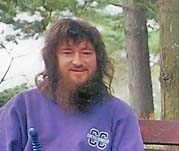 David Lee Custer of Parkman, Maine, used to think he was not much of a risk taker, but events of Sept. 3, 2003, proved otherwise. In the evening of that late-summer day, Custer, then 45, climbed onto an overturned and burning car to help save the 3-year-old boy trapped inside.

For their efforts, Custer and his co-rescuer, Mark A. Potter, then 42, of Canaan, Maine, were awarded the Carnegie Medal in 2004.

A delivery company courier, Custer drove upon the scene in Canaan to find that a car had left the unpaved roadway, went partially down an embankment, and came to rest on its passenger side against some trees. Fire had broken out in the car’s engine compartment, and smoke was filling its interior, making visibility, already hampered by dusk, difficult. Potter was atop the car, having just pulled its driver, a 22-year-old woman, through the opened driver’s door.

Custer joined him there and, holding the door open, supplied a knife for Potter’s use in freeing the woman’s son, Evan, who was strapped in his car seat. Partially entering the car when Evan remained trapped, Custer aided in muscling him free and handed him off to others. Soon after Custer and Potter vacated the car, flames virtually engulfed it.

Ever since the rescue, Custer thinks about life in a new way. Among other things, he appreciates it more, and he makes it a point to savor day-to-day existence. “The remarkable experience,” he says of the rescue, made him focus on what he could accomplish in life, and, metaphysically, it made him wonder, “Do things happen for a reason or is this coincidence?”

Whatever the answer, Custer, a deeply spiritual man, concluded that “all of us can perform kingly deeds and duties, nourish the great clan, have a heart for the tiny mouse, and see a wee bit of God’s light in all races, cultures, and thoughts of men.”

“Rally your mental strength to move your feet,” Custer says, and “dance to the tune of goodness.”

The son of a Methodist minister, Custer was not always religious. In his late teens “while wintering in a shack,” he began to read the Old Testament “to prove that it was wrong and filled with inconsistencies. Instead, the more I read, the more impressed I was at the historical content and moral code. Knowing events in the Old Testament makes understanding Shakespeare and Tolkien and all in between a lot easier.”

What followed then was extensive travel— Israel, Greece, Germany, Ireland, Scotland—during which met his wife, Maarjaana (“Mary”), a Finn, at a gate in the walls of Jerusalem. “You really grow as a person through travel because you see the different ways people are living,” Custer said. “In Greece, people live more slowly. To me, they didn’t seem to be as concerned about making money. They just had a good time.”

His travels enabled him also to research his ancestral roots in Kaldenkirchen, Germany. “If I didn’t read about history and religion, I probably wouldn’t know so much about my family,” he said. “Some of my ancestors were burnt at the stake” because of their religious beliefs, while others fled to the United States—North Carolina, Kentucky, Ohio, and Iowa—to escape religious persecution.

Married eight years, Custer and his wife live with their three children, Rebecca, 8, Tara, 6, and Shiloh, 5, on 50 acres in a solar-powered house that took 10 years to build. There is ample space for farming activities, including an organic garden and 35-tree apple orchard.