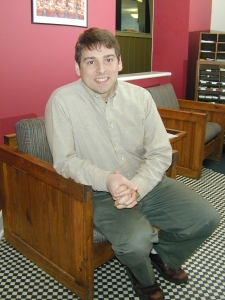 At 3 a.m. on a chilly October morning, Craig Allen Cross became a hero when, without regard for his own safety, he entered a burning apartment building in Frostburg, Md., to save his neighbor. A gas explosion had blown the structure apart and set it on fire.

“I had to go in and get him,” explained Cross, even though he barely knew the 72-year-old man who would sometimes wave to him from his kitchen window. “When I heard Bill’s haunting cries for help, I suddenly felt a strong connection between us.”

The connection, explained Cross, who teaches parenting classes at the Cumberland YMCA, wasn’t based on common interests, economic status, race, religion, or age. It crossed all boundaries and shattered every typical barrier between people.
When Cross, who was barefoot, traversed rough timbers and other debris to reach his neighbor, he was keenly aware of his human connection with Issac W. (“Bill”) Bradburn. He raced up the staircase to the second floor. He wasn’t bothered by the cuts he got on his neck and head, nor was he pushed back by heat from the fire.

“I knew I was going to do whatever I had to do to help him and that any injuries I got would heal,” said Cross, who was 32 at the time. “I absolutely believed, for some reason, that I would be able to complete the rescue.”

Cross found his neighbor, dazed and burned, in the kitchen of his smoke-filled apartment. Although he wanted to also save Bradburn’s dog, which had wandered into another room, he was reluctant to leave Bradburn alone. He decided to come back for the German Shepherd and, later, felt remorse because the dog died in the fire.

“But my thoughts were focused on Bill, just on him,” said Cross, who gently grasped Bradburn under the arms and led him down the staircase to the back yard.

On June 6, 2003, Cross received the Carnegie Medal for his heroic actions. Instead of feeling proud of what he accomplished, however, he was humbled by the experience.

“I was allowed to do something good for another human being,” he said. “That is a true blessing.”

About a month after the fire, shortly after Bradford was released from the hospital, Cross played guitar at a benefit to raise money for his new-found friend. And, he discovered after getting to know him, they share the same birthday—August 2.