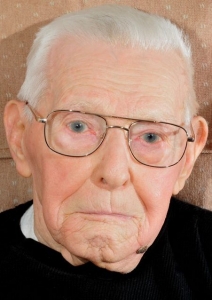 D. Chester Connor, who celebrated his 100th birthday Jan. 14, 2010, is a true hero to those who know him. When Connor was just 14, he saved a 25-year-old man from drowning in the Atlantic Ocean at Stone Harbor, N.J. The man had been swimming in high surf for two hours when he realized he had ventured out too far and there was no lifeguard on duty.

Of the 30 or so people on the beach, Connor—who was a member of a YMCA swim team and lifesaving corps—was the only one who headed out to help. He towed the man, who was a good 50 pounds heavier than he was, 100 feet back to wadable water. For his efforts, Connor received the Carnegie Medal.

But saving the man’s life isn’t the only reason Connor, of Lancaster, Pa., is known as a hero. “He’s my hero. He’s such a man of deep faith, patient, kind, and helpful to everybody,” his daughter, Judy Weaver, said. Daughter Anita Bowers added he is a good father and is very slow to anger.

The oldest living member of his church, Connor was actively involved in the life of the congregation. Known as “St. Chester” to some, he was a life vestryman and chairman of the property committee. He supervised the restoration of the church’s steeple when the wooden shingles began falling off—the steeple is now copper-clad. In the 1970s, he started the church’s refugee resettlement committee after being deeply moved by a sermon on the plight of Asian “boat people.” When the first family arrived in Lancaster after fleeing Vietnam, Connor stayed with them overnight in the basement of the parish house because he thought they might be scared. Since then, he has helped other Vietnamese families, a Ugandan family, and a Bosnian family.

When he wasn’t helping his church, Connor was volunteering with Meals on Wheels. He was 92 when he quit driving for the organization, his goal having been “to make sure the old people would get their meals.”

The youngest of three children, Connor was a carrier for the Intelligencer Journal during his grade-school years. He graduated from Lancaster Boys High School in 1927 and was able to go to college through a scholarship he received from the Hero Fund. He graduated with a degree in electrical engineering from Pennsylvania State University in 1931, his first job as an electrician’s helper earning him 50 cents a day. He then worked for a year as a draftsman at Lancaster Iron Works, where he got a hernia. While he was convalescing from surgery, he met Rosemary T. Ulrich, a student nurse. They dated for a few years and married in 1935 after Rosemary graduated from nursing school. Connor then worked at Hamilton Watch, where he started as an engineer and retired 26 years later after holding supervisory positions in engineering and quality control. Because he was involved in defense work—making fuses for bombs—Connor didn’t serve in the military. He was, however, an air raid warden during World War II.

Connor and his wife had four daughters, 14 grandchildren, 16 great-grandchildren; and one great-great-grandchild. After 65 years of marriage, Rosemary died in 2000. Connor lived on his own until age 99, when he moved to Village Vista Nursing Home in Lancaster.