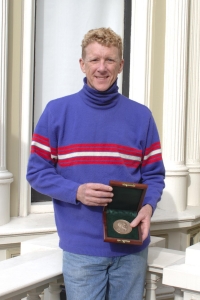 When Stephen F. Coenen saw a man being beaten late at night on a street in the French Quarter of New Orleans, he did not turn away. Instead, he continued on his bicycle to the scene and confronted the two assailants by throwing his bike at them, hitting one of them. From close range, one of the assailants then shot Coenen in the chest, severely injuring a lung. The bullet exited his back.

Coenen, who was returning to his nearby home that night, recalls seeing the victim staggering along the sidewalk just moments before the assault. “He had no wits about him,” Coenen said, adding that his initial reaction was to catch up with him and sit him down. But before Coenen, then 53, could reach him, the assailants rushed the man, took him to the pavement, and started to beat him as they demanded his money.

Something in Coenen pushed him to act. “It just wasn’t right,” Coenen said. “Neighbors should do whatever it takes to help each other out.”

Coenen didn’t realize he had been shot until the victim told him, and he then collapsed to the sidewalk. He has since recovered from his injury, although at times he finds he has to restrict his activity.

The incident left Coenen feeling suspicious of strangers, and he lost any desire to walk about the neighborhood, something he used to enjoy. “I was cautious even going out the front door,” Coenen said. “I just didn’t want to go through anything like that again.” Still, Coenen was glad he helped the man. “It would have been worse if I found him dead in the street.”

Other changes took root in Coenen, a landscape architect, after his heroic actions: Now seeing how short life can be, he no longer “sits and thinks” about something he wants to do, but takes action. For example, he has started to pursue his passion for writing, taking advantage of his savings to afford him the time. One writing project he may tackle would focus on his customers. Writing from the perspective of a Catholic man, he sees a book in his dealings with wealthy Jewish women, his predominant clients. For now, however, he is staying with shorter works, like stories and plays.

Another major change in Coenen’s life was thrust upon him recently—dealing with effects of Hurricane Katrina, which devastated his hometown last August. At the time, Coenen was in San Francisco to help a friend work on a project to preserve certain of that city’s Victorian-style homes from being demolished. Although his house in the French Quarter suffered only minor damage, the hurricane thwarted his business. “Landscaping in New Orleans is not foreseeable for a while,” Coenen said, noting that many of his clients have had to leave the polluted city and it is not yet clear when they can return. “They have nothing to go home to.” Coenen himself will remain in San Francisco for at least a year.

Katrina’s effects saddened Coenen. “A lot of the city was ‘blown away.’ It is such a tragedy to see this happen to such a historic place. The city will come back, but it will take many years,” Coenen said. “These are sad times. New Orleans was so full of life and activity.”