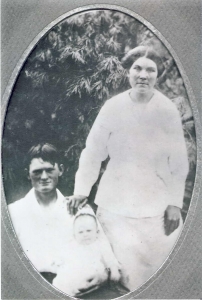 Amos F. and Sarah Cantrell, with one of their children

Amos Franklin Cantrell was a sharecropper in northern Alabama whose yearly earnings by the mid 1920s were only $500. Life was hard for him and his wife—with seven children and an eighth on the way—and then he died on May 14, 1925, while saving a man from suffocating in a well.

Cantrell and his family lived on rented land out of New Market, about 15 miles northeast of Huntsville. Their holdings were scarce and included two mules that were not then paid for. At about 9 a.m. on the Thursday on which he died, Cantrell, 37, was plowing a field with those mules when he heard screams for help coming from a neighboring farmhouse. Responding to the scene 500 feet away, Cantrell found that a man engaged to deepen a 60-foot dry well was overcome by marsh gas at the bottom of the well. His “uncanny breathing” could be heard plainly by those gathered at ground level.

Having been in a few wells previously and knowing that they sometimes contained “damp air,” Cantrell volunteered to descend into the well for the victim. With a rope tied around him, he was lowered to the bottom of the well, where he removed the rope, secured it to the victim, and then signaled to be lifted. Those at the surface raised the men, but as they neared the top, Cantrell fell back into the well, the fall breaking his neck and killing him. The victim, 40, was removed from the well. He remained unconscious until the next evening and was ill for several weeks afterward.

All eight children married, remained in the area, and gave Mrs. Cantrell 36 grandchildren and 35 great-grandchildren. One of her grandsons, Phillip Kennedy of Toney, Ala., is the son of Mrs. Cantrell’s eighth child, Frankie, who with two sisters are the only surviving of Cantrells’ children. Kennedy recalls vividly his grandmother’s farm, which included a stock barn, smoke house, pig stalls, and a root cellar.

“I am proud of my family, my mother, and my grandmother,” Kennedy said. “Most of all, I am proud of Amos Franklin Cantrell, my grandfather.” Kennedy, 56, skilled in printing and graphics, has channeled his pride into chronicling his heritage, including producing the accompanying sketch of his grandmother’s farmhouse. The house was torn down after her death—no photos of it are known—and the medal itself was donated to the Huntsville Library.