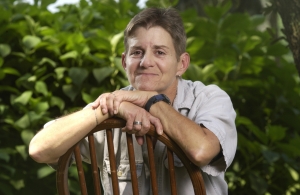 “I know God’s hand has been over my life. He thinks I’m special.” Powerful words from a woman who has had her share of tragedy, but Nancy Browning, partially paralyzed by a bullet meant for another woman, speaks them with the faith of Job.

It was on April 28, 2002, when Ms. Browning, then 47, responded to gunfire in the parking lot of a church in Pensacola, Fla. She found the woman being threatened by an estranged friend and placed herself between the woman and the assailant. Acting as a shield for the victim, Ms. Browning asked the assailant not to shoot further, but the assailant fired, the bullet striking Ms. Browning and tearing through her abdomen.

“I’ll never forget the look of hatred in her eyes,” Ms. Browning said of the woman who shot her.

The bullet ruptured her intestines, sending her to the hospital for 59 days. Ms. Browning does not remember much of that time. “I was afraid when I came to that everyone would be mad at me because I got into the middle of something I had no business getting into,” she said. Instead, she emerged a hero, cited by the Carnegie Hero Fund Commission with a Carnegie Medal for risking her life to save another.

Ms. Browning was left partially paralyzed, but more tragically, she was left without her independence. “I had to change everything about my life—it stopped me in my tracks.” Today she walks with a cane and requires the use of an electric scooter to get around. A portion of the bullet near her spine was removed two years after the rescue act, and that has helped her deal with her injuries, as she had felt the fragment constantly.

Emotionally? “My anger goes up and down. Every day when I stand, it’s there. I don’t know if it will ever go away.” Ms. Browning attended the assailant’s trial, and when she looked at her, “My heart stopped. It was overwhelming.” Still, she would do it all over again: “If I hadn’t intervened, she would be dead,” Ms. Browning spoke of the woman she aided, someone she had never even met before. “I am grateful she is alive, despite my problems.”

“I was raised in a small town where the best Christian and moral values were taught to me by my mother and grandparents,” Ms. Browning said. Her home was in Alabama where her mother, brother, and sister still live. Her brother is a minister, as is her uncle, and while Ms. Browning was growing up, her mother played the piano in their church while her grandfather led the choir.

The day she was shot was Ms. Browning’s third trip to the Holy Cross Metropolitan Community Church. “I was so happy,” she reflected. “It was a beautiful spring day.” She has since become a member of the church, and the church has helped her both emotionally and financially. She said she had searched her whole life for a church that gave her the good feelings she had about the one in which she was raised. “I finally found it. We have a wonderful pastor,” Ms. Browning said of the Rev. Sandy O’Steen, who presented Ms. Browning’s medal almost two years after her act of heroism. She received a standing ovation at the presentation, one woman in the church calling her “an angel in our midst.”

Another member of the congregation gave Ms. Browning a car, for which she is most grateful. “One of the greatest joys of my life is driving,” she says. “I used to travel a lot when I was young.” She is grateful also to those who came to her aid by donating the blood she needed after the shooting, and to the hospital, which forgave the half-million-dollar debt she accumulated while there.

Angel and hero…How does she feel about these illustrious titles? “I am humbled by them,” Ms. Browning says. “When someone calls you a hero, it puts a lot of responsibility on you.” Above all, she feels blessed: “I almost died. I am a living, walking miracle and I am alive through the mercy of God.”