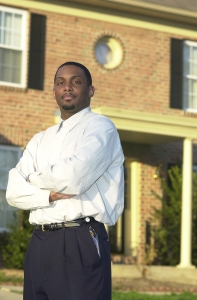 June 2, 2000, was an exceptionally hot day in Mitchellville, Maryland. By evening, temperatures were still stuck in the high 90s, and Kevin W. Brown, 28, returning from the hardware store with mulch and plant food, still had yard work with his father to look forward to. Once he was home, however, events took an unimaginable turn.

Brown was talking to his sister when his father interrupted with an urgent message, “Call 911! The house across the street’s on fire!”

Before that evening, Brown had never wondered if he would ever enter a burning building to save someone—he knew his response to that hypothetical question was no, and it always had been. But when the situation actually arose, he had no time to ponder the hypothetical. He instructed his mother to call for help, then ran across the street to assess the scene with his father. They knew a family lived in the house and worried someone could still be inside.

Brown surveyed the first floor while his father searched for a hose long enough to combat the fire raging upstairs. There was no one downstairs and a hose could not be found. So father and son proceeded upstairs.

Smoke obscured their vision, and Brown recalls fire along the walls. The heat was intense, yet Brown felt nothing. Near-blinded by smoke, they pressed on but found no one and had to descend for air.

Although having failed once, the two saw no option but to try again. Crawling low to the carpet they found Kevin Scott, the house’s owner, who lay semiconscious on the floor upstairs. The pair drew him down to the first floor and outside, where he regained consciousness. He pleaded with the men, “My daughters are in the house!”

Scott’s urgent focus on the fate of his children compelled Brown to climb the stairs a third time. Beneath heavy smoke and in furious heat, he came to the realization that the floor print of the burning building was identical to that of his father’s house. Lacking a better option, Brown made his way to what would be his sister’s room in the house across the street. As he had heard the cry of a child, he called out, “If you come to the door I can get you out.”

There was no response. Nearly overwhelmed by the billowing smoke, Brown turned back.

Confronted with the situation, Brown learned that he would indeed enter a burning building to save a life. But even after he was awarded the CARNEGIE MEDAL for his bravery, the source of his courage remained a mystery. Whether it was instinct, faith, upbringing, or a combination of all three, he still cannot determine what drove him to act. Allowing for this ambiguity, there is a strain of consistency as Brown describes his home life, and his heroic actions and their aftermath.

While Brown was growing up, his father always told him, “You get only one life.” Brown took that to mean life is a singular and precious gift. The experiences of that stifling June evening served to make the message ever more profound.

After the accident, Brown had the opportunity to return to the Scotts’ house. In the room to which smoke had earlier denied him access, he found a handprint 10 feet from the door. “That’s just three steps,” said Brown.

The proximity of the handprint weighed on him and for a long time Brown felt guilty for not pushing forward.

Maybe he could have saved the girls, who were trapped inside, but maybe not, and three instead of two would have died in the fire. Ultimately, Brown forgave himself, with the help of his family. They are thankful he withdrew when rescue was highly improbable.

Brown had been raised to believe in the value of human life. On June 2, 2000, he demonstrated that he had learned this lesson by repeatedly putting himself in danger so that a father and his daughters would not be robbed of that singular blessing.