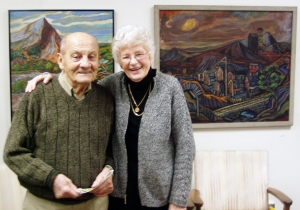 He crawled under a roof fall—97 feet in length and 15 feet thick—to reach another miner buried in the debris. The rescue at Robena Mine, near Carmichaels, Pa., on Jan. 31, 1956, earned Blazek a Carnegie Medal.

In the 50th anniversary year of the rescue, the lifelong Masontown, Pa., resident told his story. At 90 years of age, Blazek’s memory is clear, and the firm handshake of a man used to hard work belies his advanced age.

He said the day started normal. Part of his job as a “jeep driver” of the mantrip that ran on a mine track was to respond to emergencies, such as a report of a piece of heavy machinery buried in a roof fall. On that day 50 years ago, Blazek got a message that “a man was covered up.” Percy Hooper, then 33, was operating a coal loading machine when the roof came down. Blazek said that Hooper was in a stooped position trapped between the machine and the fall.

As other miners pumped compressed air into the debris, Blazek said he couldn’t just stand around. “I got my shovel… I made a hole… then I started crawling,” he said. He inched his way toward Hooper with tons of unstable rock overhead. When asked what had prevented the compromised mine roof from caving in again, Blazek responded, “The Lord.”

He felt the trapped miner’s leg about 10 feet into the fall and chipped away at surrounding rock with a hand ax in an attempt to free him. The battery cable from Hooper’s headlamp was tangled in the debris, holding him fast. Miners slid a knife to Blazek and he cut the cable free.

A page on the Carnegie Hero Fund Web site describes what happened next: “The foreman inserted his body partially into the tunnel and grasped Blazek’s ankles, and others then cautiously pulled all three from the tunnel in a human chain,” it reads. The page goes on to note that “Hooper, who had been buried an hour and a half, was hospitalized for four days from shock and bruises.” Blazek said his only injury was a “skinned belly.”

Blazek, who spent 30 minutes in the tunnel, said he “got nervous” when he finally left it. But when he went home that day, he acted as if nothing had happened. “He didn’t tell me about it,” said Selma Blazek, his wife of 59 years. “I didn’t want to work her up,” he said.

Blazek worked both in the mines and in a series of other jobs, including a stint with Ford in Detroit. He said he’s thought about what the miners killed in recent tragedies went through, but that that wouldn’t stop him from working in the mines again.