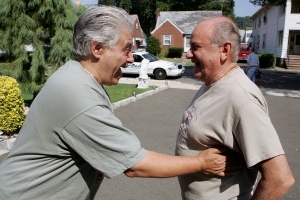 Philip Bevacqua, right, is congratulated by his former boss, retired Paterson, N.J., Police Chief Lawrence Spagnola. Bevacqua was awarded the Carnegie Medal in July of 2008. Photo by Dave Bergeland of the Herald News

It’s not the first time the retired Paterson, N.J., police captain, who tackled a gun-wielding ex-cop near his home, sprang into action without regard for himself, his family and former coworkers said.

“When I was a little girl, we were still living in Paterson and we heard an alarm go off in a jewelry store,” Rosa Marmo said of her dad, Philip Bevacqua. “My father pretty much left me and my mother in the car and chased the man.” And although he didn’t catch the jewelry thief all those years ago, “the guy dropped the jewelry,” Bevacqua said with a smile.

On July 16, 2007, the grandfather of six elbowed and then repeatedly punched a gunman near his home after the man ran over an ex-girlfriend and her lawyer and later wounded Totowa police officer John P. Sole.

In a half-hour conversation over coffee and pastries inside the kitchen of his split-level home, Bevacqua, surrounded by his wife, Maria, and two of their four children, said being a police officer for half his life instilled a drive to aid those in distress. “All I wanted to do was help the officer,” he said while flexing his now black-and-blue forearms. An eagle and American flag tattoo masked most of the bruises.

Detective Bob Smith, who worked with Bevacqua on the “Mod Squad,” an anti-mugging police unit created in the early 1970s, recalled Bevacqua leaping to the defense of his brother, then a patrolman, after he was ambushed by a burglar.

“My brother was chasing the suspect into an alleyway,” Smith said. “A fight ensued over my brother’s gun. Philly was just coming around the corner and noticed there was a bluecoat in trouble. He whacked the suspect in the head with a night stick.”

Bevacqua was enjoying the cool summer evening on the deck in his backyard with his wife and his sister that day more than a year ago when he said he heard four or five gunshots. Then 77, he raced down the steps to the front of his house and saw Sole and the gunman “tussling” and saw blood covering Sole’s arm.

“I heard him say ‘Put it down,'” Bevacqua said. “I didn’t notice anybody helping him. I went across the street and went right after the guy.” After he punched the assailant, Bevacqua said, the man turned to face him with a gun in hand. Seconds later he saw Sole shoot the gunman in the chest. Before that, Bevacqua said, he didn’t realize the assailant was armed.

“You could have even been shot by the cops,” Rosa told her father. “I know,” he replied, and shrugged.

Totowa Mayor John Coiro, who spent most of Monday night with Sole at the hospital, said he briefly spoke to Bevacqua early Tuesday to thank him for his heroism. “He became involved in a situation that most people wouldn’t get involved with,” Coiro said. “It’s nice to see that there are people out there who will help when others are in need. We’re thankful that he was there when he was there.”

But his family chided him for putting his sense of duty over his own well being. “By the time we got to the end of the driveway, I thought, ‘Oh my God, he’s gonna get shot,'” said Maria, his wife of 54 years. “Then I saw the blood running down his arms and I thought he was shot. I called him a crazy old fool.”

“My only concern was ‘Is he okay?'” Rosa said. “He could have had a heart attack.” His son, Joseph, said the family felt a range of emotions about their father’s actions. “We’re happy,” he said. “But we were afraid at the same time.”

The Paterson native credits a three-year stint in the Army, more than 25 years with the Paterson police force, and sporadic weight-lifting sessions in his basement with keeping him in fighting condition. “I try to keep in shape,” he said.

Former Paterson Police Chief Lawrence Spagnola, who patrolled with Bevacqua when he came onto the force more than 30 years ago, said he wasn’t surprised about Bevacqua’s heroism. “Whenever I worked with him, I didn’t have to worry about my back,” he said.

Back in the kitchen, Bevacqua said he even felt a little sorry for the gunman, who was pronounced dead later that night. “I felt bad a little bit, but he brought this on himself,” he said. “I think he lost it.”