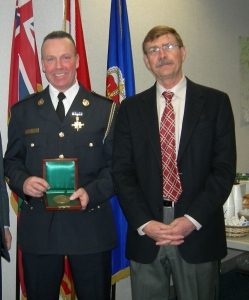 At mid-afternoon on August 1, 2006, Daniel William Bailey, a police officer for Canada’s Ontario Provincial Police, was off-duty and visiting a family member near Central Elgin, Ontario, when he heard an accident in which a compact sport utility vehicle with two women in it rolled over and came to rest upside down. Both women remained strapped to their seats, and one woman’s arm was pinned to the highway by the vehicle’s roll bar. Flames soon broke out.

Over the course of the next few minutes Dan, with the flames and heat intensifying, used his pocketknife to cut the one woman’s safety belt and dragged her from the vehicle. He then returned to the vehicle and cut the other woman’s safety belt, but her trapped arm prevented him from pulling her to safety. Yelling to others at the scene for help, while still attempting to free her, including crawling under the vehicle and lifting it using his back, they soon responded and lifted the vehicle, allowing Dan to pull the woman free.

Dan was awarded the Carnegie Medal in September of 2007, and other forms of recognition from the OPP and the Canadian government were also bestowed. These rewards were much appreciated, and will be coveted. In a different way, they’re equal in satisfaction to seeing his police dog Tyson succeed in his job and earn his reward—a Kong, the chewy, almost indestructible rubber “toy” used by the police, military, and others for training dogs.

As Dan explained, it is the ultimate reward for Tyson when he finds drugs or missing persons, controls crowds, disarms criminals, and in less strenuous circumstances, shows off when he and his other canine buddies are put through their paces for the public’s education and enjoyment.

Tyson is an 80-pound, four-year-old “black and tan” German Shepherd, and Dan got him when he was just over a year old. Since then, beginning with 16 weeks of 12-hour days in general obedience and bonding training, then weeks more for specialized work, plus regular refresher courses, and of course actual police duties in between, Dan and Tyson, understandably, have forged a strong bond.

“I have the greatest job in the OPP,” Dan says, meaning getting to work daily with a truly special dog. Every time Dan makes a move for one of Tyson’s collars; different collars are used for drug searches, tracking, crowd control, and so on, Tyson knows he’s “going to work” and gets so excited it’s easy to see that Dan and his constant companion both love their jobs, and each other.