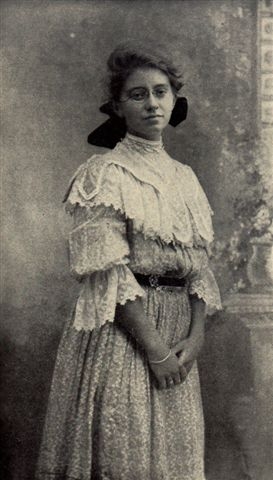 Her rescue of a man from drowning that day earned her the distinction of being the first female to be awarded the Carnegie Medal. And the accompanying grant of education aid put her first on the list of those benefiting from the scholarship program of the Commission, which was established by Andrew Carnegie earlier in 1904.

The summer day found Ernestine at an Atlantic Ocean beach near North Weymouth, just south of Boston. A number of others, including Harry M. Smith, 36, a coachman from nearby Quincy, were in bathing. Early Commission records describe the scene in one long sentence: “From the edge of the beach a slip about 20 feet long and four feet wide extends into the water, and immediately beyond this is a large float, which is used for small boats to land at, and also for bathers to dive from, which is about 50 feet long and 20 feet wide, and made of logs.”

Smith had been “swimming around” when at about 11 a.m. he became tired and tried to make it to the float. Before he could reach it, however, his strength gave out and he sank. He soon surfaced only to sink a second time. “An alarm was immediately raised,” according to the century-old account, “and Miss Atwood, who, in her bathing suit, was, with a friend, in a small boat, rowed rapidly to the scene.” When she caught sight of Smith’s head for a moment, she dived from the boat and swam to the point where she had last seen him.

A good swimmer, Ernestine let herself down into the water, then opened her eyes and looked about for the drowning man. She discovered that he had drifted under the float and was doubled up and lying face downward. She swam under the float, grasped him by his bathing suit, and with her free hand succeeded in reaching the surface, where she shouted for assistance. People on the float pulled them from the water. Smith was unconscious, and it required “fully 10 minutes” to resuscitate him.

Ernestine was a student in the design department of the Boston Museum of Fine Arts and was described as quite talented by her instructor. As she was “anxious to complete her course in this work,” the Commission provided $500 to help with remaining costs. The grant was in keeping with the wishes of Andrew Carnegie, founder of the Carnegie Technical Schools, the forerunner of Carnegie Mellon University. “For exceptional children,” he directed the early Commission, “exceptional grants may be made for exceptional education.”